Millions awarded to transform transport links in the South West

Two schemes in the South West have been awarded nearly £65 million as part of the Government’s Levelling Up Fund.

Following the success of the reopening of the Dartmoor Line in November 2021, more than £13 million has been granted for a new station, a West Devon Transport Hub at Okehampton in Devon; and nearly £50 million for a Mid Cornwall Metro scheme.

The West Devon Transport hub, to be known as Okehampton Parkway, will be a new station on the edge of Okehampton adjacent to the A30 to act as a parkway for North Cornwall and West Devon, addressing limited parking at Okehampton and extending the benefits of the railway further west.

The Mid Cornwall Metro will create a sustainable transport corridor through Cornwall. The new direct train service will link four of Cornwall’s largest urban areas: Newquay, St Austell, Truro and Falmouth/Penryn, so residents will be able to better connect to employment, education (including higher education and university), and key services. It will reduce journey times and ease road congestion for people living along the route.

“This really is super news for rail and wider sustainable transport choices across the South West.

“A new station at Okehampton will build on the massive success that the reopening of the Dartmoor Line has already had. And the improvement to Newquay that the Mid Cornwall Metro will bring will really enhance services, better connecting people with jobs, students with education services, and leisure opportunities for all – providing valuable support for the community and local economies.”

“This is great news for residents and businesses in Cornwall. This project will make a real difference to the everyday lives of people and create so many opportunities by connecting communities to jobs, services, education and each other, as well as providing economic benefits in allowing quicker, easier access for commuters and visitors coming into the area.

“This is just the beginning, with further LUF bids to come as well as the £132m Shared Prosperity Fund we are already beginning to distribute to projects that drive good growth.”

“It’s fantastic news for Okehampton, as well as for the Borough as a whole. Okehampton has so much to offer and this transport hub, which follows on the success of the Dartmoor Line, will make travelling to the town even easier.

“The new integrated travel links include a new station, specifically designed for the town. A car park with EV charging points and cycling facilities, which are essential for this town with the hugely popular Granite Way cycling nearby, and walking route on its doorstep, along with the northern edge of Dartmoor and all its walks.

“This is really wonderful news and I’d like to thank Devon County Council, GWR, and Mel Stride MP for all of their support with this project.”

Nationally, more than 100 projects have been awarded a share of £2.1 billion from round two of the Government’s fund to create jobs and boost the economy.

“Through greater investment in local areas, we can grow the economy, create good jobs and spread opportunity everywhere.

“That’s why we are backing more than 100 projects with new transformational funding to level up local communities across the United Kingdom.

“By reaching even more parts of the country than before, we will build a future of optimism and pride in people’s lives and the places they call home.”

With funding now confirmed, detailed plans can be developed and planning consent sought before the start of construction work. 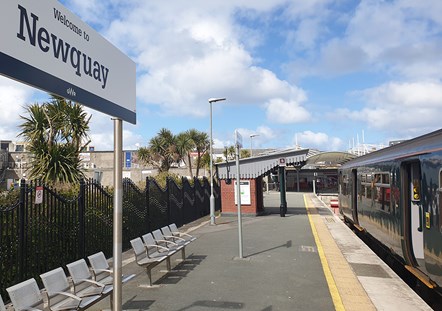