Great Western Railway has underlined its support for the armed forces community by signing the Armed Forces Covenant.

The covenant is a promise by the nation that those who serve or have served in the Armed Forces, and their families, should be treated fairly when accessing services in the UK, and do not face discrimination compared to other citizens.

GWR is preparing to further demonstrate that support with its special Poppies to Paddington operation on Remembrance Day, Friday 11 November.

This year will be the third time GWR has joined forces with The Veterans Charity to carry poppy wreaths from across the network to be laid at London Paddington’s iconic war memorial on Platform 1. “Poppies to Paddington was conceived in 2020 to ensure communities within the GWR network could honour our fallen heroes despite the restrictions in place around Covid-19.

“We’re looking forward to another special Poppies to Paddington operation on Friday 11 November and we’re especially proud to have now formally signed the Armed Forces Covenant.

“The armed forces are a really important part of the social fabric of the GWR network and this national scheme demonstrates our support for military personnel, their families, and veterans, recognising their fantastic contribution to the community.”

“The Armed Forces Covenant is a promise by the nation ensuring that those who serve or who have served in the armed forces, and their families, are treated fairly and are not unfairly disadvantaged by their or their partner’s military service.

“We’re pleased that Great Western Railway has signed the covenant to pledge its support to those who have served and are serving for our country, be they regular reserve or adult cadet instructors”

GWR committed to signing the Armed Forces Covenant as part of the National Rail Contract it was awarded by the Government in June.

Among the conditions of the covenant, it must demonstrate its support for the employment of veterans, service spouses and partners; promote national events like Armed Forces Day and Remembrance activities; and offer a travel discount to members of the armed forces community through the HM Forces Railcard.

As well as signing the covenant, GWR will also endeavour to achieve a silver award in the Defence Employer Recognition Scheme (ERS).

The Ministry of Defence scheme recognises organisations that pledge, demonstrate or advocate support to defence and the armed forces community, and align values with the Armed Forces Covenant. 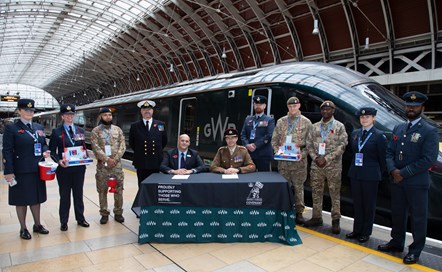 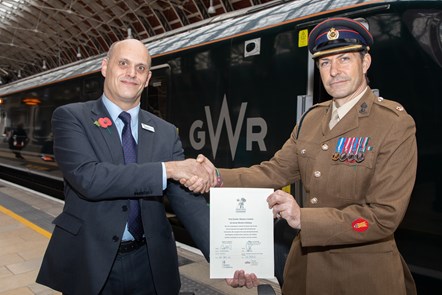