A project to safeguard the nation’s railway archives has received a £110,000 grant from Great Western Railway.

The Railway Industry National Archive (RINA) Education Project aims to provide a vibrant and permanent resource which can be used for educational and research purposes.

Through a partnership with STEAM – Museum of the Great Western Railway in Swindon, the National Railway Museum aims to bring the railway to life for young people across the South West, encouraging them to consider the industry as a career choice.

As part of GWR’s franchise agreement with the Department for Transport, the train operator is committed to supporting schools, colleges, community and other not-for-profit organisations by aiding a number of initiatives.

“The complexity of rail franchises past and present has meant that the identification, designation and ultimate preservation of records has proved challenging. It is imperative that such a key part of railway heritage is not lost for current and future generations.

“There is a pressing need to identify what material is held by various franchises across their main offices to ensure that material vital for recording how Britain’s railway system has worked in the privatised era can be identified and – where appropriate – designated and preserved.”

As well as documenting a major period in Britain’s railway history, work between the NRM and STEAM will see the production of recorded interviews with GWR colleagues active in the industry during the privatisation era.

These will be made available for educational activities and feature alongside other modern-day material in an exhibition at STEAM.

“We are delighted to see Great Western Railway supporting Swindon and Wiltshire like this. It is important that we all work together as we start the recovery from Covid-19 and that means supporting local communities wherever we can.

“We are very pleased to see support for our very own STEAM museum, working in partnership with the National Rail Museum.

“STEAM is a great museum and a great visitor attraction for Swindon, drawing people to the area and helping us to build back the local and regional economy. We’re really pleased GWR is investing like this in its ‘home’ town and to see the focus is on helping young people into railway careers.”

“Funding will be split between NRM and STEAM to enable a project that will benefit Britain’s railway operators and the communities in which they serve. It also provides the basis for securing the future of the very records that tell the story of Britain’s railway during one of the most pivotal periods in the industry’s history.”

About the National Railway Museum

About STEAM – Museum of the Great Western Railway 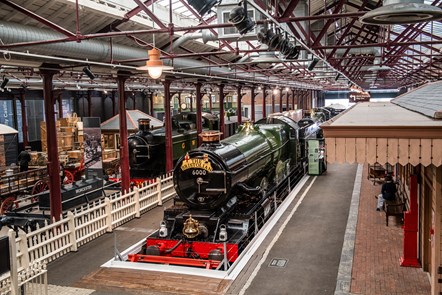