Commuters will be able to travel from London Paddington to Canary Wharf in just 17 minutes – half the time the journey would take today.

It means the capital’s central business hub will be within an hour’s reach from Reading; and under 90 minutes from Oxford and Swindon.

To illustrate the improvement in journey times, we invited local railway historian Tim Dunn to race against himself using both the Elizabeth line and traditional London Underground. You can view the video here:

GWR Managing Director, Mark Hopwood, described the opening of the line as a game-changer for passengers travelling into the heart of London.

“The Elizabeth line will be completely transformational for Great Western Railway customers, improving connectivity and reducing overall journey times from Paddington into other key points in the city.

“It’s a really exciting step forward for the whole industry but it will bring particular benefits to Great Western Railway. We know that 81 per cent of our customers who travel into Paddington then take an onward journey elsewhere in London.

“If you’re travelling from Reading or Oxford, Paddington becomes a much more attractive option as you’re able to reach the heart of the city in half the time it would have taken previously.

“We expect these new services to help make travel on GWR services into the capital even more compelling, attracting new customers across our network and boosting demand as we work hard to attract customers back to the railway.”

The line will initially operate as three separate railways, in the east, west and through central London.

Services will start with 12 trains an hour (a train every 5 minutes) between Paddington and Abbey Wood from 06:30-23:00, Monday to Saturday. Work will continue in engineering hours and on Sundays to allow a series of testing and software updates.

Services from Reading, Heathrow and Shenfield will connect with the central tunnels in the autumn when frequencies will also be increased to 22 trains per hour in the peak between Paddington and Whitechapel.

By May next year the separate sections of Elizabeth line will become fully connected and services run to the final timetable. There will be up to 24 trains per hour between Paddington and Whitechapel during the peak when the railway is fully open.

Find out more about the Elizabeth line here.

First Greater Western Limited, trading as “Great Western Railway” (GWR), operates trains across the Great Western franchise area, which includes South Wales, the West Country, the Cotswolds, across southern England and into London. GWR provides high speed, commuter, regional and branch line train services, and before the covid-19 pandemic helped over 100 million passengers reach their destinations every year. GWR was awarded an extension to its direct award franchise (called DA3), which shall run up to 31 March 2023, with an option to extend for a further year. 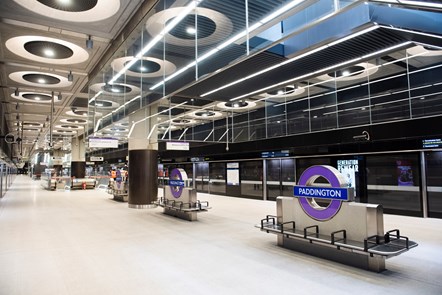