Work will start next week on a £1million scheme to make Chippenham station fully accessible from both sides of the railway, delivered by Great Western Railway on behalf of Wiltshire Council.

Contractors were on site yesterday (Tuesday 3 January) in preparation for work that will bring a third lift into use on the north side of the station – making the station fully accessible with step-free access to platforms from both sides of the railway – along with additional disabled car parking spaces, and more cycle parking facilities.

Part of the scheme will involve turning the staircase on the northern side of the footbridge, which also acts as a public right of way.

The public right of way via the footbridge will be temporarily closed from Monday 9 January to allow work to go ahead and will reopen in the spring. The alternative walking route for non-rail users will be via Union Road, New Road and Station Hill. The two station lifts and the stairs from the main entrance (south side) will remain open for rail users during the works.

“This is the next stage in our planned improvements for Chippenham station. It will mean a more welcoming, safer environment and a fully accessible station.

“Turning the staircase also means we will be able to create a safer entrance and exit for anyone using the public right of way, which will no longer feed straight on to the road.”

“We are really pleased to see this improvement scheme start, especially as it complements the £1.98million package of transport measures already completed by the council to improve pedestrian and cyclist access to Chippenham railway station.

“Our aspiration is to have well-connected communities that enable local communities to live, work and play locally, so these continued improvements at the station fully supports this aim.”

“We’re excited to see another step towards completion of the Station Hub upgrade. This important work will help develop safe access to the station for all visitors and residents using Chippenham station.

“This very welcome project brings together the elements of the station improvements, ultimately assisting the long-term development of Chippenham and its economy.”

“This is a great example of partnership working across multiple organisations to improve access to the railway for our passengers.

“Turning the stairs to the north of the station will also allow for safer pedestrian access and an improved walking route for people using the public right of way over the railway line.

“We’d like to thank local residents and passengers for their patience while this work is completed and we’ll look to minimise any inconvenience where we can.” 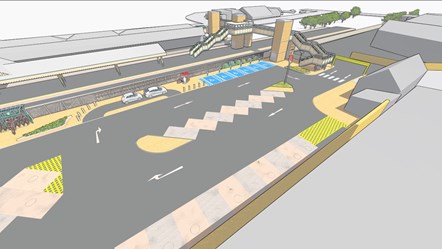