‘Blueming Marvellous Monday’ has been designed by GWR and NR to dispel the idea that so-called ‘Blue Monday’ – the third Monday of January – is the most difficult day of the year.

On a day packed with positivity, colleagues at Reading station will be handing out blue wooden roses and asking customers to ‘Tell us what makes you smile’.

Stations across the GWR network will also be supporting Samaritans’ annual Brew Monday campaign, which encourages friends and family to stay connected by having a cuppa and a catch-up.

“We’re trying to brighten up everyone’s day. Forget about it being the so-called saddest day of the year – Blueming Marvellous Monday is designed to put a smile on our customers’ faces.

“Our colleagues across GWR and Network Rail were keen to do something positive to support Brew Monday, and this aligns well with Samaritans’ own campaign this year, which turns the idea of ‘Blue Monday’ on its head and encourages people to reach out and chat every day of the year.

“Samaritans has worked in partnership with Network Rail and the wider rail industry since 2010, encouraging the public and our staff to recognise the power of human connection and start a conversation which could save a life.”

“We’re so grateful to the rail industry for their support of Brew Monday again this year. At Samaritans we know there is no such thing as Blue Monday and people can feel low at any point of the week or year.

“So, Brew Monday, combined with GWR and NR’s idea of a ‘Blueming Marvellous Monday’ this January, provides passengers with an extra portion of positivity!

“We want everyone to know that you are never alone and we’re encouraging them to check in with people they care about for a cuppa and a chat as talking can save lives. Our volunteers are available around the clock to listen to anyone who needs support this Brew Monday and every other day of the year, 24/7.”

As well as conversing with customers at Reading station, GWR and NR colleagues will be hitting the high notes alongside Winnie the Wellbeing Piano, with Railway Mission Chaplain for the South West of England, John Roe, tinkling the ivories.

The Brew Monday support comes as part of the rail industry’s suicide prevention programme and partnership with Network Rail.

Samaritans has worked in partnership with the rail industry and British Transport Police to reduce suicides on the railway for over 10 years, having trained over 26,000 rail and BTP staff to look out for passengers and make conversation if they feel someone might be vulnerable.

Anyone can contact Samaritans, free, any time from any phone on 116 123, or email jo@samaritans.org or visit www.samaritans.org

GWR provides high speed, commuter, regional and branch line train services, and before the covid-19 pandemic helped over 100 million passengers reach their destinations every year. GWR was recently awarded an extension to its direct award franchise (called DA3), which shall run up to 31 March 2023, with an option to extend for a further year.
Find out more here: https://www.gwr.com/about-us

We own, operate and develop Britain's railway infrastructure; that's 20,000 miles of track, 30,000 bridges, tunnels and viaducts and the thousands of signals, level crossings and stations. We run 20 of the UK's largest stations while all the others, over 2,500, are run by the country's train operating companies.

Usually, there are almost five million journeys made in the UK and over 600 freight trains run on the network. People depend on Britain's railway for their daily commute, to visit friends and loved ones and to get them home safe every day. Our role is to deliver a safe and reliable railway, so we carefully manage and deliver thousands of projects every year that form part of the multi-billion pound Railway Upgrade Plan, to grow and expand the nation's railway network to respond to the tremendous growth and demand the railway has experienced - a doubling of passenger journeys over the past 20 years.

Anyone can contact Samaritans FREE any time from any phone on 116 123, even a mobile without credit. This number won’t show up on your phone bill. Or you can email jo@samaritans.org or visit www.samaritans.org

Every 10 seconds, Samaritans responds to a call for help.

Samaritans is a charity and it’s the public’s kind donations and around 20,000 volunteers that mean we are always there for anyone struggling to cope. Find out how you can support us or volunteer with us. 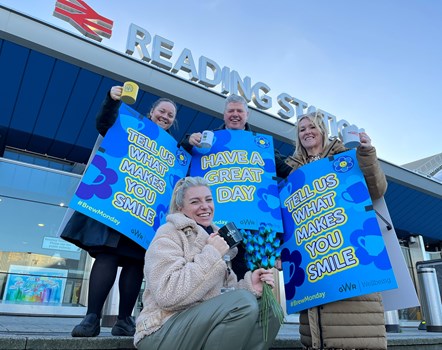