Parking at Gloucester Station doubles as part of station revamp

Car parking at Gloucester’s railway station has been doubled by Great Western Railway, as part of a phased project to modernise the station.

Car parking at Gloucester’s railway station has been doubled by Great Western Railway, as part of a phased project to modernise the station.

Over 200 additional spaces are now available at a new, separate car park, with even more to be added during the £2.7 million works.

This week 208 extra car parking spaces have been made available following the completion of the first phase of works, including three accessible spaces. On completion of the project, phase two, there will be 243 spaces in total with six accessible bays, as well as the access ramp, new station entrance and wider improvements.

“More and more people are turning to rail for their local and long distance journeys; to meet this demand later this year we will start to see brand new Intercity Express Trains reach Gloucester, offering more seats and more frequent services.

“GWR is dedicated to supporting the communities it serves and this new car park when complete, alongside improved rail services, will enable the local economy to continue to thrive both now and into the future.”

“It has taken a lot of effort from all sides to reach this stage and these extra 208 spaces are a major bonus for the city as a whole.

“I’ve said it before, but this latest step forward in the project shows what we can achieve when national and local government and the private sector all work together.”

Phase two of the project is due to be completed this summer. 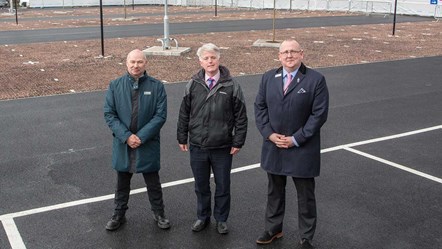