Andy, (50), was diagnosed with cancer in May 2015, after he originally went to the doctors with concerns that he was suffering from asthma. A series of tests later, he was subsequently diagnosed with stage 4 bowel cancer.


After chemotherapy, Andy was eventually discharged from hospital on 26 August 2015 and continued with his treatment while returning to work in Swindon on a part-time basis. He finished his last round of chemotherapy on 21 January this year.

Since returning to work he has set his sights on “Giving something back to the cancer charities that offer so much by way of support to both sufferers and all their friends and families,” he states.

So far he has raised over £1250 and is keen to raise even more as a thank you to Macmillan for the great work that they do.

Want to support Andy and Macmillan? You can donate here:

Andy still has a stoma, which are relatively common for bowel cancer sufferers and can be difficult to adjust to, although they are something rarely heard of among non-sufferers. He eagerly awaits its removal before he will be back to full health.

Brave the Shave is Macmillan’s most recent campaign to increase cancer awareness. It has resulted in men and women all over the country shaving off their hair to raise money. Andy’s hairdresser Bryan Angelinetta of Salon Secrets, Chippenham, gave up his time for free today to support Brave the Shave. 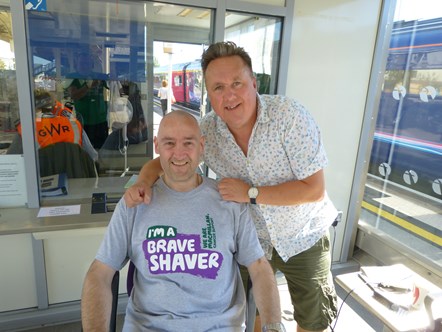