GWR is helping celebrate Cornwall’s culinary contribution to the world by transporting Mr and Mrs Pasty to London for a week of activities promoting the history and heritage of the humble pasty.


As part of the events taking place GWR customers will be offered complimentary pasties on-board select services thanks to a partnership with Bodmin-based pasty producer Proper Cornish.


To help promote the ever-popular pasty and the best way of travel to and from Cornwall, GWR has teamed up with ‘Let Them Eat’ to offer social-media users the chance to win a month’s supply of pasties. To stand a chance of winning the prize, simply re-tweet the image posted by @GWRHelp of Mr and Mrs Pasty alongside GWR’s Night Riviera sleeper service.

“The response from GWR to the inaugural Cornish Pasty Week has been phenomenal and the Cornish Pasty Association could not have asked for a better collaboration. Taking the message about Cornwall’s culinary icon across the network and hosting our team on the superb sleeper service has given the team behind Cornish Pasty Week an enormous boost.

More than 120 million Cornish pasties are made each year with Cornish pasty producers generating an estimated £300m to the Cornish economy.

“It’s a delight to work with the Cornish Pasty Association in such a fun way to promote the Cornish pasty and a wonderful part of our network to the rest of the world. We hope this week will inspire more people to visit Cornwall and try a world-famous pasty.”

Cornish Pasty Week has developed out of the World Pasty Championships held at the Eden Project every year on the nearest Saturday before St Piran’s Day.

The grand finale of the Cornish Pasty week will be the seventh annual championships at Eden on Saturday March 3 when pasty-makers will descend from around Cornwall, the UK and the world on the home of the famous Biomes near St Austell. 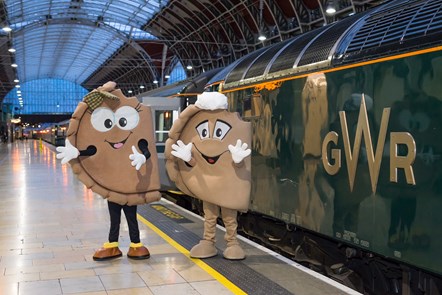