Great Western Railway has teamed up with a local bike hire company, and an app developer to launch a new bike hire hub at Plymouth Station.

Great Western Railway has teamed up with a local bike hire company, and an app developer to launch a new bike hire hub at Plymouth Station. The hub can house four bikes, adding to 80 available from Plymouth Bike Hire elsewhere in the city, enabling rail users to get to great places in a sustainable way.

Passengers can use the Donkey Republic bike app to locate, hire and unlock a bike 24/7; and all by using their phone.


“I am very pleased that Plymouth has a new bike scheme at Plymouth Station in conjunction with Plymouth Bike Hire. This move is great for the environment and for the people of Plymouth who want to enjoy the benefits of having a bike without having to buy one. There are lots of wonderful places to see and visit in Plymouth that can be accessed by bike.”

“If you haven’t been on a bike for a few years, think about having a go. We’re getting more cycle friendly as a city and now have some incredible routes to try, including the new Laira rail bridge and the stunning waterfront route.

“It’s good to see more cycle hire spring up for people to get pedalling – it’s great for both locals and visitors to see Plymouth, Britain’s Ocean City from the saddle.

“It’s particularly handy to have bikes at the rail station so that people get on and get out there.”

“We, as a business and as individuals, have a responsibility to reduce the impact we have on our environment.

“Working with Plymouth Bike Hire, I am delighted to help launch this service to our passengers and to encourage cycling while enabling more people to take advantage of the train.”


The app was designed by the bike loving people of Copenhagen and launched in 2015. It proved instantly popular and is now available in seven countries. 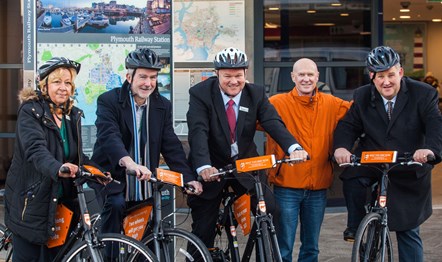