Great Western Railway’s Managing Director has been named as Industry Leader of the Year at a top rail awards ceremony in London. Mark Hopwood, MD of GWR since December 2008, was named as the recipient of the special award at last Friday night’s Rail Business Awards 2017.

Great Western Railway’s Managing Director has been named as Industry Leader of the Year at a top rail awards ceremony in London.

Mark Hopwood, MD of GWR since December 2008, was named as the recipient of the special award at last Friday night’s Rail Business Awards 2017.

Announcing the award, Rail Business Intelligence Magazine editor Robert Preston praised Mark for leading the company during a period of significant change, and challenge, as the Great Western undergoes its greatest period of investment in a generation. The extent of engineering works across the GWR network was unprecedented, he said, while reflecting on how the company has worked so hard to minimise the impact on customers.

“This year the judges have selected someone who has rarely been out of the headlines. With a strong team behind him, he has demonstrated an ability to innovate at short notice and keep the trains running amidst one of Britain’s biggest infrastructure upgrading projects, while negotiating a new direct-award franchise with significant investment commitments. It is of course Mark Hopwood.”


Speaking after the awards dinner the Industry Leader of the Year recipient, Mark Hopwood said:

“It was a great honour to receive the award. I see this as recognition to all the good work of the whole team at GWR.

“It is a privilege for me to lead an excellent team of people at GWR, who are working hard to transform the experience for our customers as we roll out new or improved trains across the network.

“I know as we meet the challenges together we will achieve our vision of revaluing rail in the hearts and minds of our customers.”

GWR was also shortlisted for five awards at the RBAs including: Customer Service Excellence, for Passenger Information During Disruption; Digital Technology Excellence for the social media team; Technical Innovation for Old Oak Common; Railfreight Excellence for their transportation of sea food in partnership with Intercity Rail Freight; and Maria Ludlam was nominated as young professional of the year. 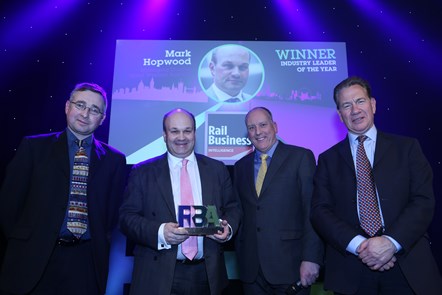