More than 200 poppy wreaths were placed on Great Western Railway trains and carried to London Paddington station on Remembrance Day.

The special Poppies to Paddington operation involved nine train services and more than 60 stations covering the length and breadth of the Great Western network.

With many Remembrance events in the capital and around the region suspended because of the pandemic, GWR and The Veterans Charity coordinated with organisations including the Royal British Legion and The Soldiers, Sailors, Airmen and Families Association (SSAFA) to place wreaths on board early-morning services heading to the capital.


Poignant: Wreaths by the statue of the Unknown Soldier on Platform 1 at London Paddington

Local authorities and military bases also took part in the operation and 226 wreaths were taken to London.

On arrival at Paddington they were placed at the station’s iconic war memorial, on Platform 1, for the Remembrance Day service.

Poppies to Paddington was GWR’s way of helping our communities to ensure our fallen heroes were remembered despite the restrictions in place around Covid-19. The arrival of the Poppies and the Remembrance service was broadcast live on GWR’s Facebook page to help people to #RememberFromHome.


Floral tribute: Some of the wreaths on the 0900 service from Bristol Temple Meads

“We all know how much change the pandemic has brought to everyone’s lives but we were determined Remembrance Day should be marked in the best way possible.

“Poppies to Paddington allowed all those organisations who would usually be present for the Remembrance services at London Paddington and around the region to pay tribute to the fallen by laying a wreath. We were proud to be able to help in this way.”


Poppy to Paddington: Julie Shelley with the wreath sent by Harry Billinge MBE, the D-Day veteran who last month had a GWR train named in his honour

“Thanks to GWR and our friends in HM Armed Forces, the Emergency Services and numerous other groups and charities who support veterans, Poppies to Paddington meant that people from across the region could still pay respects and remember those who fought and remember those who died in conflicts from World War One to Afghanistan. All from the safety of their home.”

“In the year that marked 75 years since VE Day and VJ Day, the Legion is remembering the contribution of every member of our Armed Forces who stepped up to defend our way of life then, and those who continue to do so today, whatever the threat.

“Although we acknowledge that Remembrance is not the same and communities cannot come together as they usually do at this time of year, it was still important to provide people with a safe outlet to pay tribute and as the champions of Remembrance, we were grateful to the GWR for helping people pay tribute.”

“Recognising the service and sacrifice of the Armed Forces around and on Remembrance Day itself is extremely important. In these increasingly challenging times, Poppies to Paddington was a poignant and entirely fitting example of how we need to adapt in order to continue marking this significant annual event.”

The first of the Poppies to Paddington services started from Penzance at 0458, calling at 10 stations before arriving into London Paddington. One of those stations was St Austell, where D-Day veteran and #GreatWesterner Harry Billinge MBE had his wreath placed on board the train that was recently named in his honour.

Wreath bearers and organisations were met at each station by GWR staff who helped to place the wreaths on board.

In view of the latest lockdown train operators are reminding passengers to:

GWR has been providing rail services throughout the pandemic and has worked to ensure that these are as safe as possible. This includes increased cleaning regimes and the use of a virucidal spray; extra staff at key stations to offer help and guidance; and processes in place to help customers maintain a safe distance where possible such as restricting the number of reservations available

Notes to editors
Great Western Railway (GWR) provides high speed, commuter, regional and branch line train services. We help over 100 million passengers reach their destinations every year - across South Wales, the West Country, the Cotswolds, and large parts of Southern England.
We’re currently seeing the biggest investment in the network since Brunel so we can offer more trains, more seats, and shorter, more frequent journeys and continue the network’s heritage of helping connect more businesses to new and prosperous markets. Through a series of initiatives we aim to be a good neighbour to the communities we serve and are committed to making a positive social impact in those regions. Learn how we're Building a Greater West at GWR.com. GWR is a FirstGroup company.
__________________________________________________________________________________________
The Veterans Charity was founded in 2008 and provides immediate needs support to Veterans and families who find themselves in hardship. In the past 5 years alone, we have delivered vital provisions including food shopping, clothing, household items, utilities support and communications devices to more than 2200 cases, bringing much-needed and deserved relief and morale boost. 2020 has been their busiest year to date. The Veterans Charity is registered in England and Wales as a charity under number 1123149.

SSAFA, the Armed Forces charity, has been providing lifelong support to our Forces and their families since 1885. In 2019, our teams of volunteers and employees helped more than 85,000 people in need, the currently serving (both regulars and reserves), veterans from the Second World War and those who have served in more recent conflicts, as well as their families. SSAFA understands that behind every uniform is a person. And we are here for that person – any time they need us, in any way they need us, for as long as they need us. www.ssafa.org.uk 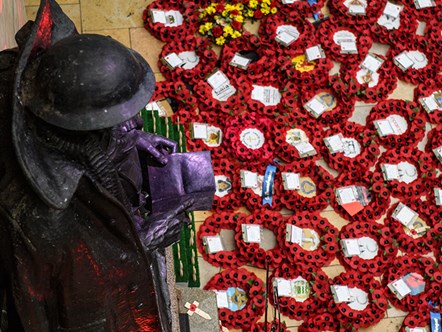