Great Western Railway hosted ‘an audience with Dr Paul Stephenson OBE’ on board his very own train to mark the start of Black History Month.

Civil rights pioneer Dr Stephenson was joined by friends and members of GWR’s REACH network (Recognising Ethnicity and Cultural Heritage) for a journey from Bristol Temple Meads to Swindon. Dr Stephenson, 84, was awarded an OBE in 2009 ‘for his services to equal opportunities and to community relations in Bristol’ and in 2017 received a Pride of Britain Award for Lifetime Achievement.

Joining him for today’s special audience was Esther Deans MBE, director of One Bristol Curriculum, which works with schools to address diversity in the community by promoting unity through knowledge and awareness of others.

“Paul was so proud to have a GWR train named in his honour last year and events like this help to increase awareness of his pioneering work.

“Paul fought for equality and civil rights for more than 60 years and the closer relations we enjoy today between all the communities of Bristol are thanks to his unstinting dedication.”

GWR Inclusion and Diversity Manager Odis Palmer said the train operator was proud to have recognised Dr Stephenson as one of its Great Westerners, celebrating past and present heroes from across the network.

“Last year’s train naming was especially important for our REACH network as it helped to demonstrate that GWR is an inclusive place to work and is representative of the communities we serve.

“We are proud of our association with Dr Paul Stephenson and today’s event has been truly inspiring, learning more about his dedication to improving race relations and encouraging community involvement.

“Today was a wonderful opportunity for colleagues to ask questions and to celebrate Black contributions to British society. It was the perfect way to mark the start of Black History Month.”

Dr Stephenson famously led a boycott of the Bristol Omnibus Company in 1963, protesting its refusal to employ Black or Asian drivers or conductors. After a 60-day boycott supported by thousands of Bristolians, the company revoked its colour bar.

A year later he achieved national fame when he refused to leave a public house until he was served, resulting in a magistrates’ court trial which was dismissed.

Dr Stephenson’s campaigns were instrumental in paving the way for the first Race Relations Act in 1965. He later worked for the Commission for Racial Equality in London and in 1975 was appointed to the Sports Council, campaigning prominently against sporting contacts with apartheid South Africa.

He was granted Freedom of the City of Bristol in 2007.

“Paul’s contribution to racial equality in Bristol extends beyond the stand he, Roy Hackett, Owen Henry, Audley Evans and Guy Reid-Bailey took during the Bristol Bus Boycott. He has continued to work for equality in Bristol, sharing his experience and expertise with us. I am delighted that GWR continue to honour Dr Paul Stephenson’s legacy in our city through this event.”

Other Great Westerners to be celebrated on GWR’s Intercity Express Trains include Her Majesty Queen Elizabeth II, Bristol paramedic Kathryn Osmond, who fought tirelessly to raise awareness of the skin cancer melanoma, Fleur Lombard, the first female firefighter to die on duty in peacetime Britain, and George ‘Johnny’ Johnson, the last surviving British member of the Dambusters raid. 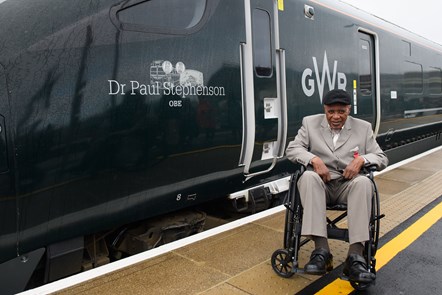