As part of the centenary commemoration of the First World War, Great Western Railway has named a Class 43 locomotive 'Harry Patch – The last survivor of the trenches', the longest surviving soldier of the Great War.

As part of the centenary commemoration of the First World War, Great Western Railway has named a Class 43 locomotive 'Harry Patch – The last survivor of the trenches', the longest surviving soldier of the Great War.

Harry was a native of the West Country, born in Combe Down, near Bath, in 1898 the son of a stonemason. He was conscripted in October 1916 and eventually posted to the 7th Battalion, Duke of Cornwall's Light Infantry serving as an assistant gunner in a Lewis Gun section. On the 22 September 1917, Harry was badly injured when a shell exploded overhead, killing three of his comrades.

The train will be unveiled by Harry’s Grandson and last known surviving relative Roger Patch, and in attendance will be the renowned biographer Richard Van Emden; close friends of Harry towards the end of his life Jim Ross and David Isaacs; as well as local dignitaries.

“We are absolutely delighted that GWR have named one of their locomotives after Grandad, he would have been thrilled about it. He was a very modest, quiet man and it was incredible how so many people took him to their heart as he became a symbol of remembrance. But to us, he will always be Grandad and we are extremely proud of everything he achieved.”

Harry became a symbol of remembrance as he became the last surviving soldier to have actually fought in the trenches and when he died on 25 July 2009 he was aged 111 year, 1 month, 1 week and 1 day.

GWR commissioned a specially designed livery as part of its commemoration of the Great War. The design includes the words from Laurence Binyon's Ode to Remembrance, a poem that whenever Harry heard it, he remembered his fallen comrades. Their nicknames, Jack, Jilly and Maudy are also featured within the design.

The locomotive will serve as a poignant reminder to the thousands who travel along the Great Western Main Line of the sacrifices that were made during the First World War. 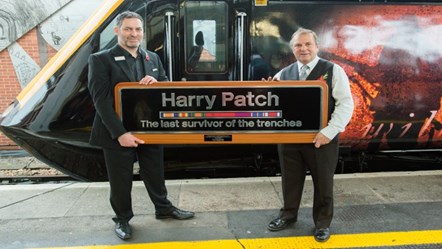